Cornicabra olive- is a tree of olive family, resistant to frosts, droughts and winter colds. Being the Mediterranean tree, it has adapted to continental climate. It adapts to poor soils as well. 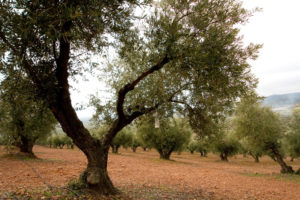 The tree has a straight trunk ending on a dense top, with a small amount of sprouts, consisting of short branches. Young trees are light gray with an ochre tint. The branches grow chaotically, almost without the formation of barren flowers on them. They are not struck by insects. The leaves are oblong, spear-shaped and symmetric, light green from one side and gray – greenish from the reverse side.

Young sprouts are light gray with ochre tint. This tree is of late flowering and maturating, self-pollinated.

Its cultivation is carried out in the provinces of Toledo and Ciudad Real, in the mountains of Toledo.

It is the second Spanish variety in the cultivated surface and the third in production.